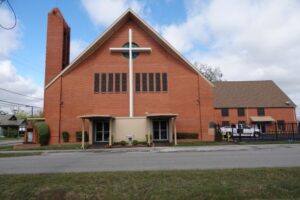 In 1886, Mrs. Wells opened her home to a minister and a small group with a desire of having a Church of great faith organized in the Fifth Ward in Houston, Texas.

This outreach led to the establishment of Payne Chapel AME Church. Mr. James Calvin Lindsey named the church after Bishop Daniel Alexander Payne who was elected the 6th Bishop of African Methodist Episcopal Church in 1852 and served for 41 years. Through the Christian spirit of Mrs. Wells, these pioneers, with a local Minister, Reverend Richard Smith, as leader, were granted the use of her property at 1700 West Street without any financial remuneration. The Church remained at this site for six months with Reverend J. C. Butler, a mission minister, serving as temporary leader.

After much planning and many prayers, Mr. Tucks, Mr. Walker, Mr. George Taylor and others acquired property in the 1500 block of Hill Street. A Church edifice was built at a cost of approximately three thousand dollars ($3,000). Reverend J. C. Butler followed the small but inspired membership from West Street to Hill Street and became the first official Pastor of Payne Chapel.

The pioneers met the challenge of a growing neighborhood and an increased membership by planting roots of African Methodism in a larger edifice on the corner of Lee and Davis Streets with Reverend J. C. Butler in 1920.

Payne can rightfully boast of having been served by progressive, alert, and spiritual ministers from its beginning to the present day.  They all successfully led their flock in a manner that fit perfectly into the scheme of the progress of the Church. They performed heroic and momentous tasks that proved to be towering mountains of spiritual strength.